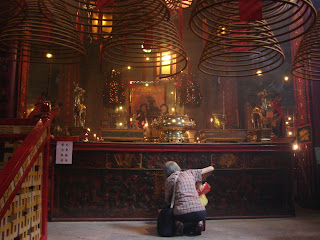 Early morning dawned in a drizzly haze across Hong Kong. The view from the apartment was breathtaking. The smallness of the apartment seemingly a contrast to the immensity of the sea.

Having originally planned to go to Lantau Island, we were so exhausted after the first real sleep of any kind in the past few days that we decided instead to go to Man Mo Temple. One of the oldest temples in Hong Kong – it’s noted for the huge coiled cone-shaped incense sticks that loom from the temple’s smoky ceilings. Stepping outside from Merton to finding Man Mo Temple was no easy task. We get on a bus that we think according to our calculations on the map, will take us to Des Voeux Road (Birdie chorry for the misspelling!). However, we get off much too early and enter Hong Kong’s famed sea food road. I didn’t know it was famous at that time but the smell of fish and sea assaulted me the minute I stepped out. The passing rain drawing a gentle breeze that wafted through the tiny road. Sea food of every kind. Prominent boards displaying “Shark Fin for Sale” everywhere. Going by the number of shops that were offering shark fins, I wonder if any of these great predators will be alive in the future – killed by the greatest predator known, Man.

More consultations with the map. More consultations with passing people. Man Mo seems horribly elusive. But there is one thing I love about Hong Kong – its easy layout means that you really have to be a fool to be lost for too long. And after another 20 minutes of walking, there it was. Thanks to Birdie. The Man Mo Temple. Looking terribly small compared to other temples I have seen in mainland China. Yet inside, it was a spectacle in itself. Smoky and dusky. Built in the 1800’s the temple is dedicated to two deities: Man, the God of Literature, and Mo, the God of War. A strange combination this, Literature and War.

It is said that these incense were “food” to the spirits. That is why the Chinese always keep the incense burning for no one wants to keep their grannies hungry in another world according to legend. Smile. The story makes me smile to think of it. I could barely see the two deities – Mo is no other than GuanYu who had his own temple in Xuchang. We travel everywhere yet we see the same Gods. Wonder why then, we don’t see the God who dwells within us? The cone-shaped swirls of incense blew gently down. They didn’t give me an answer – but then perhaps that is an answer in itself. To me, they represent mortality. The ashes that melt to the floor a warning to our own tired souls.

After lunch in Pizza Hut, which proved to be quite a hunt, it was time for Victoria Peak. Walking across from Central, I spy a protest. Strangely enough, the last time I was in HK, there was a protest too. The protesters are meditating in silence. Banners denouncing Hu Jintao are unfurled at the back. Policemen in uniform watch the proceedings. HK’s tenth anniversary of the handover is looming and clearly some are not happy at being associated with China’s communist regime. I walk past the silent protesters – shocked to see an open protest for the first time in China.

The peak tram is just as much of a treat as always. By the time we reach the peak though, a strange fog rolls in from across the sea. Twilight sparkles to night. The famous view from the Peak is obscured though. The wind is buffeting, pulling vast clouds from the horizon. Beneath the fog, the lights of Hong Kong twinkle. The fog creates a strange surreal atmosphere – like a deathly hand that moves across the face of a city that lived in borrowed time all this while and even now is chafed by a bond to a motherland that binds it hard. 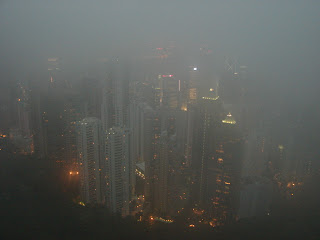