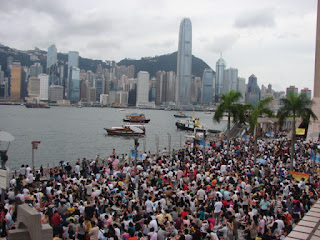 For the second time, I boarded the Star Ferry. A cultural icon by itself, the ride is all too short for the views it offers. And the price well, the best rides almost come free!

Today was the day I met John again. Old friend of mine who had helped me out as a total stranger two years ago. Then, as now, he had scurried around HK trying to satisfy my desire for a photo mug and photo T-Shirt. I got it then. Today, I didn’t. The shop that I went to in Mong Kok is closed. Today is the tenth anniversary and there are lot more shops shut in Hong Kong. Tomorrow is also a holiday as well.

Mong Kok is the most crowded section of Hong Kong. And that is saying something as Hong Kong already is one of the most densely populated cities in the world. I don’t remember where we had lunch – was it at Branto’s Vegetarian Restaurant? We tried to visit the Hong Museum of Art but entrances to it are closed. It’s just 4PM – the anniversary fireworks promised would not begin till 8:30 PM. The star promenade is already filling up fast with people. Everywhere around are uniformed policemen. People have already occupied vantage points around the promenade, using old newspapers to sit on. I can’t but think of a similar scene in India – the organization here would be replaced by organized chaos – pushing, pulling, shoving, and as a woman, I would never be safe. I hate talking about my own country this way – but then, India is giving me fewer reasons to smile these. days.

We walk for close to two hours trying to find our own spot. Each time we think we found one, we move on, thinking that the next best viewpoint might be just around the corner. I wonder if that is how I view life too – always thinking that the next best thing might be ahead and not in front of me. It’s almost time and the streets around Tsim Sha Shui look deserted, devoid as they are off traffic. Only human traffic moves along these roads down. Herded by a policemen, I reach an area almost a kilometer away from the Museum of Art. The skyline is barely visible from here yet there are hundreds of people standing. The crowd whoops as the first fireworks streak the sky. Almost like a musical crescendo, the fireworks begin slowly. Everywhere around me, every open space is occupied. Cameras flash. People hoist babies and children up on their shoulders. I wish I was a child myself as I crane my neck. The sky is crystal clear today, and the laser lights cut clearly across the famed Bank of China and HSBC buildings.

People in Hong Kong may or may not agree with Hu Jintao’s iron grip over them – politics and its petty machinations are from my mind. The skies burst in a riot of color and sound. People cheer. And for the briefest moment, I knew what it is to be part of a truly great city – and as the sparks faded from the sky and the inky blue emerged again, I felt the same that I had felt with the Buddha – peace. There, that peace was obtained in solitude. Just me and the Buddha. Here, cramped for space among thousands and thousands – I felt that maybe, just maybe, there are many moments in life when presence need not ache an absence and life’s simplest joys – are just celebrations. No matter what the occasion. 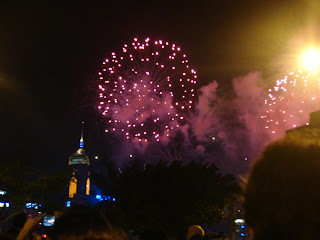